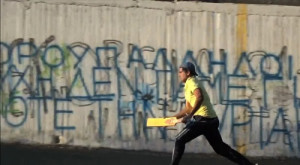 “The match has only just begun!” is a short documentary film about Riswan, a 29-year-old immigrant from Pakistan who has been living in Greece for the past 10 years. After a difficult journey, he has arrived in a strange land where people were speaking an incomprehensible language, the daily struggle for survival was demanding, and as if that weren’t enough, women were wearing jeans and mini. Overcoming the difficulties, today Riswan has a good job as a cook and has managed to set up his own cricket team which he – not by chance – called “Friends”. With them he shares the most funny part of his life, the cricket, but as the match of life never ends, Riswan in a few days is leaving for Pakistan to get into new adventures, those of marriage.